Hi there! This weekend update is coming to you a day late because I kept trying to find time to blog this weekend, and it just wasn’t happening! I hope you had a nice weekend, a stress-free Monday, and that your Tuesday goes well!

Friday afternoon, I got to leave work a little bit early because I had finished a huge project that day. I made it to a 3:45 Crossfit class. The workout was really tough. For our strength, we did a kettlebell circuit.

After that, came the workout. It was incredibly hot and humid in the gym, but I made it through 6 rounds of this doozy in 35 minutes:

In 35 minutes, do as many rounds as possible of the following:
11 sit-ups with a medicine ball (I used 10 lbs)
15 second hollow hold
9 push presses (I did 55 lbs)
15 second overhead hold
18 lateral bar over burpees
15 second plank
Every 5 minutes, take a 1 minute rest!

After the workout, I stopped at Moe’s to grab a quesadilla for dinner, and then went home to take a very long shower. I told Pat I would meet him and some of our friends in Hoboken, so I got ready to go, took Brooks for his evening walk, and headed out.

I didn’t take any pictures while I was out in Hoboken, but we went to a few different bars that night. Pat and I didn’t get home until 3:30 a.m. SHEESH. I haven’t gone to bed at 4 a.m. in forever. It was rough.

Brooks mercifully let me sleep until around 10:30 a.m., but I was exhausted from the night before. And, if I’m being totally honest, a little bit hungover. I offered to drive to the bagel store to pick up breakfast and coffee.

I went to Bagel Boy, which is my favorite bagel place in Brooklyn, and happens to have a location less than 15 minutes from where I’m currently living. They have the best bagels. Back when I was restricting food, I was happy to eat any bagel, no matter the quality. But now that I can have a bagel whenever I want to, I typically go for the best stuff I can find. Oh, and I don’t think I have bagels that much more frequently than I used to. 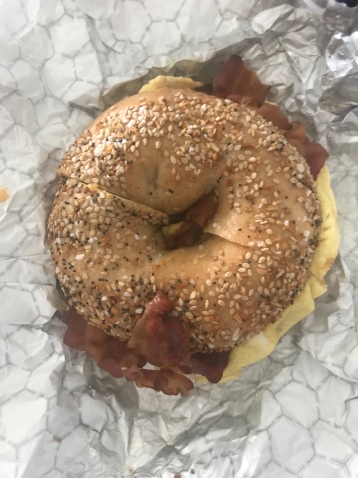 I had a bacon egg and cheese on a whole wheat everything bagel (my favorite), and a french vanilla iced coffee with milk and a little bit of sugar. Delicious! Pat and I ate our breakfast on the couch while watching a few episodes of The Office. I spent some time looking up recipes to make this week, and then we took Brooks for a walk. It was very hot, so we didn’t walk too far.

Saturday evening, Pat and I went to dinner with his parents and his sister to celebrate his parents’ anniversary. They’ve been together 32 years! Pat and I went over to his parents’ house early to spend some time with his family, and we headed to dinner shortly after. Dinner was at The Rum Runner in Seabright. We shared some appetizers. I had a mango mojito, and the salmon with orange and capers, which came with asparagus and balsamic-roasted sweet potatoes. It was absolutely delicious. For dessert, Pat and I split some rice pudding.

After dinner, we went over to Pat’s friend’s apartment to spend time with a few of our friends. We were out until almost 2am again! Seriously, I am not cut out for this!

Sunday morning, I was up early for a Crossfit class. My friend Allyssa just got her Crossfit Level 1 certification, and I am loving taking classes with her. The Sunday morning workout looked like this:

After the gym, Pat and I went to Dunkin Donuts for breakfast. I got an english muffin with turkey sausage, egg whites, and cheese, and a Boston Kreme donut. I don’t normally like to go out this often for breakfast, but I just wasn’t feeling oatmeal and hadn’t gone grocery shopping yet.

After breakfast, I showered, made my grocery list, and drove over to Shop Rite. After putting away my groceries, I cleaned the apartment for 35 minutes, something I am trying to do a few times a week in lieu of one giant cleanup that takes me hours. We took Brooks for a quick walk (again, it was too hot to go out for too long), and then headed out to Staten Island to visit my aunt, who was in town and staying at my cousin’s. On the way to dinner, we shared a bag of Doritos because we hadn’t eaten since breakfast and were totally starved. 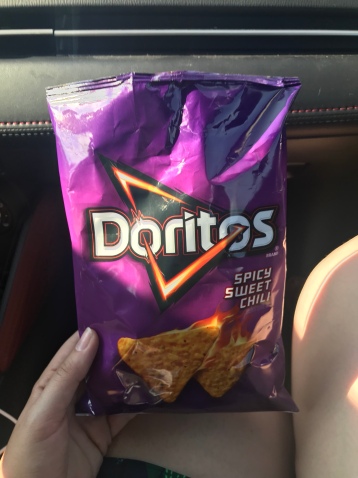 We spent time with my family, eating dinner and playing card games. I actually beat my dad a few times in a card game that we’ve been playing since I was a little kid. The card came is called “Durak” in Russian, and I think the English translation of that is “Fool”. My dad and I also taught Pat the game.

My little cousin, who I distinctly remember as a baby, is going to high school, and it’s so hard to believe that she’s already so big. I talked with her a little about how big of a change that’s going to be, and made sure she knew that she could come talk to me about anything, if she needed it. I also told her something I wish someone had told me when I was in high school: If someone is teasing or bullying you, it says a lot more about them than it does about you. Remember that, and don’t let anyone get in your head because you know who you are, and you should never feel bad about that. It sounds like a cliche, but it’s a cliche that took a long time to get through to me. I hope my cousins, nephew, and niece never have to deal with things like that. But, if they do, I want them to know they have someone they can talk to.

I didn’t remember to take pictures of the delicious food we had, but I did take a picture of my dessert. This is a slice of cannoli cake that I brought, and some grapes. Not pictured are a few cookies that were too delicious-looking to pass up. 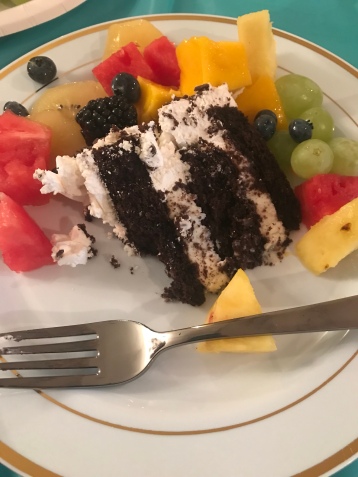 We left my cousin’s around 8:45. When we got back to the apartment, I folded some laundry from earlier in the day, we watched a few more episodes of The Office, and we passed out. It was an exhausting weekend, but it was great to catch up with some of Pat’s friends and with both our families.

5 thoughts on “The Weekend Update #3”

I’m Rachel, and I am a lawyer living in New Jersey. Welcome to my blog! I write about my daily life, food, travel, and fitness.